NSC Control Panel model which is NSC Solution F1 has all needed approvals such as VDS and is one of the most powerful control panels in the world. 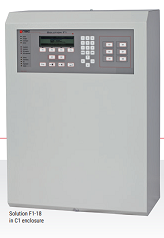 ■ ۲ to 18 loops are possible in one standard wall-mounted housing. Analogue addressable detectors and conventional detectors can be mixed in one Fire Control Panel.
■ User-friendly housings because of hinged frames which gives easy access for the technician to the wiring terminals.
■ ۳۲ Bit advanced CPU core – supplied as an upgradeable PCB module! This gives the possibility for smart software solutions and the possibility to change the micro processor very easily in the event of a new – higher performed – model in future or if one model become obsolete. In such a case the main board PCB of the “Solution F1” panel need not be exchanged or upgraded.
■ Generous memory space with 8 MB-Flash and 8 MB-RAM to allow convenient programming of links and customer specified texts.
■ Numerous running modes and detection algorithms are programmable at this new panel. In combination with analogue addressable detectors it can be perfectly adapted to every application of the market.

■ Multi protocol loop cards are available, which means that different analogue addressable detectors can be easily connected. These PCBs are able to check the loop for short circuit and wire break and detect a possible earth fault of the shielding.
■ Guaranteed 100 % compatibility to Hochiki ESP protocol as well as to Apollo XP95 / Discovery protocol in NSC Solution F1.
■ Network by ARCNET. This BUS system distinguishes by multi master ability which leads to a continuously running network even if the master node fails.
■ ۸ programmable push buttons allow a user-friendly handling of certain user defined operations.
■ Auto dynamic operating mode by the graphics display with assigned functional push buttons.
■ The texts on front fascia are easy to change for international versions of the “Solution F1”.